Now that we baby boomers are comfortably settled into middle age we’re getting a whole lot more serious about finding that elusive fountain of youth. For countless generations, it turns out, it’s to be found on a remote Greek island.

A fellow named Stamatis Moraitis discovered the secret when, in 1976, carrying a terminal diagnosis of lung cancer (the docs gave him nine months), he returned home to little Ikaria to die. Or so he thought…

Thirty-five years have passed (he’s 97 now) and he’s healthy as a horse, living on his family vineyard.

Dan Buettner knows all about the magical effect of life in Ikaria. As a researcher in the field of longevity, he’d heard the legends about the local centenarians. In fact, Ikaria ranks right up there with parts of Sardinia, Okinawa, Costa Rica and California’s Loma Linda (home to thousands of vegetarian Seventh Day Adventists) for medals in the longevity Olympics.

But what do the super-elderly across the globe have in common? Most live low-stress lives, dine on healthy foods grown (or fished or raised) locally and live in mountainous, climbing up and down hills as routine parts of each day. 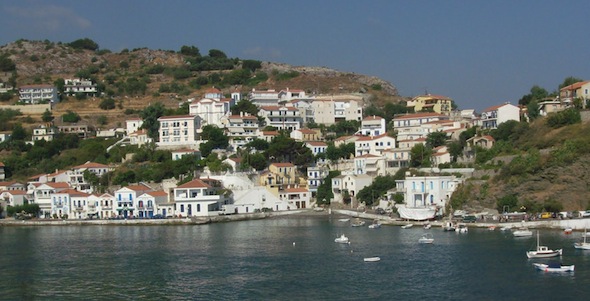 What a beautiful Mediterranean view

Despite a host of challenges (chief among them folks in out-of-the-way places who lack birth certificates to prove their age), researchers have found the Ikarian lifestyle has plenty to teach us about how to stay alive long enough to tell our great-grandchildren, “When I was your age …”

As one 101-year-old woman there told Buettner: “We just forget to die.”

Low stress (Crime is nearly unheard of most residents don’t bother with a watch.)

Communal living with regular church going and people typically sharing whatever they have with friends and family.

A healthy diet that’s low in saturated fats and sugars, consisting of goat milk, leafy greens and other veggies from the garden, lentils and garbanzo beans, potatoes, fresh fish, local sourdough bread, coffee and olive oil, plus three to four glasses of wine a day. Meat is typically served only on holidays.

A spoonful of honey each morning.

An afternoon nap. When you’re 100, how else are you going to stay up late hanging out with friends?